INSTRUCTIONS FOR THE CONSTRUCTION WORKS AFTER SWIMMING POOL INSTALLATION

Fixation of the swimming pool walls

Before the swimming pool is filled with water, walls of the pool have to be properly fixated. Fixation has to be done before concreting to prevent deformation of the walls (on the inside or on the outside).

For proper fixation of the swimming pool it’s necessary that laths, beams and stakes be as flat as possible and as long as possible. It’s necessary to put laths along the flat sides of the swimming pool on the upper edge of the pool, on the inside and on the oustide of the wall, on every 1.5-2m. Those laths have to be connected with another laths across the width of the pool. That way grille like structure will be made, as on the image bellow. 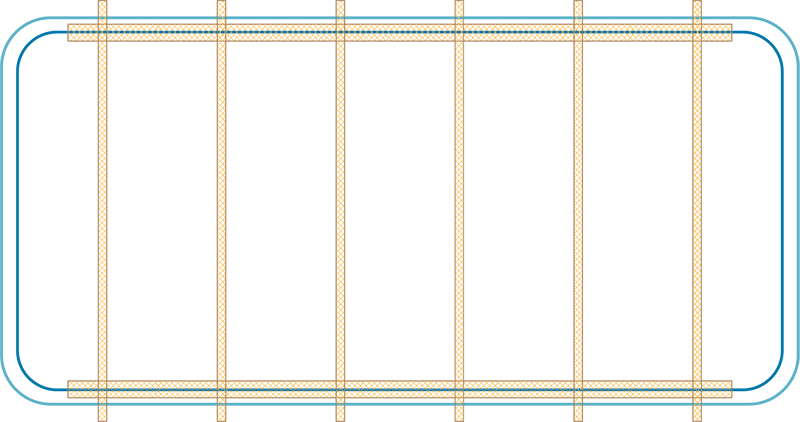 Shorter sides of the swimming pool also have to be fixated to prevent deformations. In majority of the cases it’s enough to put one lath on the horizontal fixation built of the white plastics, and with 2-3 stakes and distancers make those sides straight, on the same way as the longer one. 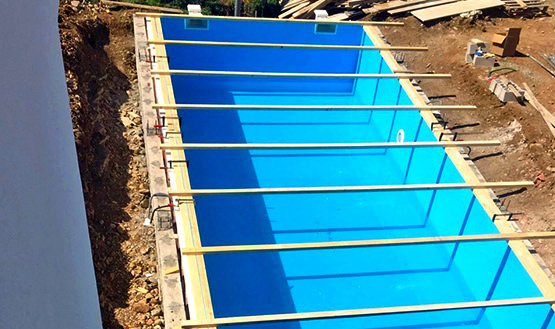 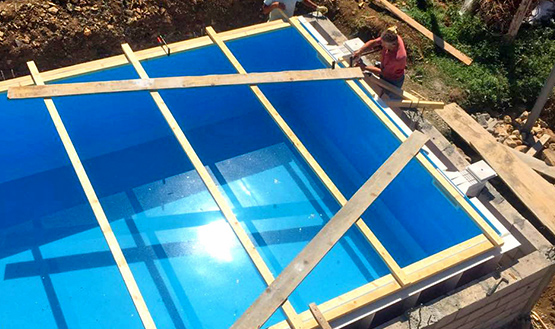 Concrete that is used for filling the space between swimming pool and construction hole is a dry concrete. For this kind of concrete, cement and sand of 2-5mm granulation have to be used. Relation between cement and sand can be from 1:3 to 1:5.

Dry concrete must be prepared in a small concrete mixer, because truck concrete mixer can’t prepare that kind of dry concrete. Concrete has to be poured gradually around the swimming pool (one wheelbarrow per two chambers which are made by vertical fixators). Pouring concrete into the space between ground and swimming pool has to be done with care to avoid damaging pipes and other visible equipment.

NIn the parts where there are pipes, concrete must not be poured directly from the wheelbarrow, but it has be done slowly with a shovel, to avoid demaging the pipes. When in every chamber of the pool (space between two vertical fixators) is poured half of the wheelbarrow of the concrete, concreting starts from the beginning.

During concreting the swimming pool can be filled with water. It’s necessary that level of the water be for 10-20cm higher then the level of the concrete which is poured between ground and pool. That difference between those two levels have to be maintained up to top of the swimming pool, to have balance between pressure of the water and pressure of the concrete. Swimming pool has to be filled with water up to half of the skimmer height, which is 8-10cm bellow the top of the pool. At the end of concreting, levels of the water and concrete will be even. During concreting it’s necessary to have constant visual inspection to avoid deformations (in a case of bad fixation) and to immediately resolve any issues, because after concrete become mature those problems can’t be fixed.

Lids of the distribution boxes of the lights, skimmer, air regulation for the hydromassage and turbo jet, and lids of the system for automatic water replenishment, have to stay on the level of the pool surrounding, to be accessible for the maintenance.

Laths which are used for the fixation of the swimming pool walls must not be removed after concreting is done for at minimum 24h.

During concreting wall deformation that goes toward ground can happen between 2 vertical fixators. That kind of deformation can occur if concrete isn’t set (compressed) so water have higher pressure then concrete and push walls toward concrete. In this case it’s necessary with some stick or lath to push concrete to compress more in that part where deformation was occurred. Compressing of the concrete has to be done slowly to avoid damage of the installations and equipment.

If during the concreting you have anything that you don’t understand, make sure to contact us.